Whenever I talk to people about what I felt in the time leading up to 25/08/2013, they would immediately ask, “Oh, were you having suicidal thoughts?”. No, I wasn’t. I have a strong (and slightly controversial) opinion on suicide, but that is for another day. My feeling, back then, was that I had had everything. I could go on to live for many more years, but it wouldn’t make a difference for my life had already reached, I felt, its saturation point. The more I would live, the more I would grieve. There was, I believed, just one way to escape this potentially endless trap – death!

That’s when she happened. There is a reason why I say ‘happened’ instead of ‘came’ or ‘arrived’. I had known her for a while, 12 months to be precise, at college. She always came across as this simple, orthodox, nice girl who liked chocolates, ice-creams, teddy bears and babies like most others did. She would sit with her friends and talk about her relatives for as long as one would be forced to say, “How can these girls never get bored?”. She, to be honest, was one heck of a hum-drum!

I was so frustrated that I started thinking, “How can a person like her, despite being so boring and mundane, be so happy whereas I am virtually dying every single day?”. I couldn’t quite find the answer. With every passing day, I started losing interest in worldly affairs and it occurred to me as if the end was at frighteningly close quarters. That’s exactly when she happened to ask, “Why are you dull?”.

She was surely not the first person to have asked me that. My family, close friends and even others, who were in touch with me on a regular basis, could sense that there was something uncharacteristically wrong. Some of them were genuinely worried, but a lot of them were simply exasperated. But I didn’t really feel like opening up to any of them. Who would possibly believe me if I said, “I am healthy, I am not gonna kill myself, but I am definitely dying”?

But when she, a person whom I repelled and how, took the effort to enquire about my seemingly pathetic state, I felt emotionally naked. I could have avoided her by supplying the usual stuff like ‘No, I am fine’ and ‘I will be alright’. Instead, I told her the blatant truth. The truth that I had lost it. That I didn’t give a damn about anything anymore. That I am, in every possible way, exhausted. She didn’t say much in return. She just looked at me, listened to all the crap I dished out to her and said, “Don’t worry, you will be alright”. I couldn’t really appreciate her prophetic nature at that very moment but boy, was she right!

For the next few days, she kept asking the right questions. It felt like she had an incredible knack of handling problematic people. She seemed adept at the art of piercing through the flesh and hitting the softest of spots. She was a magician at the peak of her powers, and one had to be wise enough, which I was, to sustain the prodigious presence of the unprecedented and unbelievable phenomenon that she was!

It was truly a game-changing moment. The two years which followed were not the best times of my life in terms of overall quality, but they are right up there for I was having a life-time experience with someone of the highest class and deftness. I would be lying if I say, ‘All my problems were gone, and I lived happily ever after’. I am still struggling. But I am not afraid of death anymore, courtesy a nonpareil relationship that graced my tumbling life ever so slightly!

So, in filmy terms, this looks like the story of a broken guy who is righted by a perfect woman. Or that of two friends who didn’t like each other at first and then were united by circumstances. Neither of them is entirely false, but I would like to describe it differently. This is not about a compassionate person who offered kind words on someone’s bad day to make the latter feel good. This is about a sheer genius at work. For me, this will always be the story of an eccentric cinephile who witnessed the greatest ‘tour de force’ orchestrated by the greatest artist he has ever known!

Happy birthday, Sash😊 You are the GOAT and need I say more😊

Have you ever played a game of ‘this or that’ wherein someone asked you to choose either ‘love’ or ‘sex‘ ? Have you ever hated a work of art because it’s almost perfect ? Have you ever realised commiting suicide is not a punishable offence but attempting it and failing is ?

I feel it’s important, not just okay, to fall sick. The human body deserves res(pec)t. The eyes don’t have to look at a computer screen, the ears don’t have to listen to someone with a peculiar accent and an even more peculiar problem, the nose can be allowed to smell and the tongue can be allowed to spell fragrance and the feet can stop participating in the well-worn threesome with shoes and socks. How unjust we are to our brittle and balsy bodies ! We put trash in and call it food, we catalyse hormonal imbalance and call it love and we rip its soul-mate, which is the soul itself, off and call it death !

A sick day also begets an intense indulgence in retrospection. The hitherto unrecognized moments of life start to unfold like a sequence of shots stitched together to make one spectacularly histrionic scene. Every decision ever taken is questioned ; every mistake ever made is forgiven ; every compliment ever received is relived ; every woman I have ever fallen in love with smiles sheepishly and says, “I like you but ..” !

That takes me back to the very beginning of this piece, courtesy my relentless fetish for non-linear narrative. Well, how can one choose between love and sex ? It’s like ‘motherhood‘ and ‘breastfeeding‘ – the former is an emotion while the latter is a process(not the only one) driven by it. Both the emotions in scope here are universal and non-controversial and so the parallel makes a beautiful sense. However, the two processes, although fundamental and essential, are not what we, the men and the mammals, talk over a cup of coffee.

Coming back to love, the phrase ‘falling in love’ has always fascinated me ! You don’t create love because it’s already there. You don’t need to reach it because it’s neither tangible nor too far away. You would rather ‘fall’ in it, because you are in its vicinity all the time trying to hold on to your roles and responsibilities and it’s just a matter of time that you cut loose and let the river of hormones be flooded like never before !

Love defies perfection in style with elegance and lot more. Art does it too. That is exactly why a perfectly executed work of artistry causes an uncharacteristic repulsion. Man and man-made stuff are special only till their strong suits are bespangled with their petty flaws. A great song is not one wherein the musicians hit all the notes to the T; it’s the one that orchestrates a marriage of accuracy and waywardness in the most dramatic fashion !

That leaves us with the final question. Why is attempting suicide an unlawful and blameworthy act ? When a person is expected to live absolutely on their own terms, why can’t they decide when to go the way of all flesh ? It’s not necessary that a question always needs an answer. Sometimes, a question just needs to be asked and that’s it. Lets consider this as one such struggling query that is asked and, thus, liberated ! 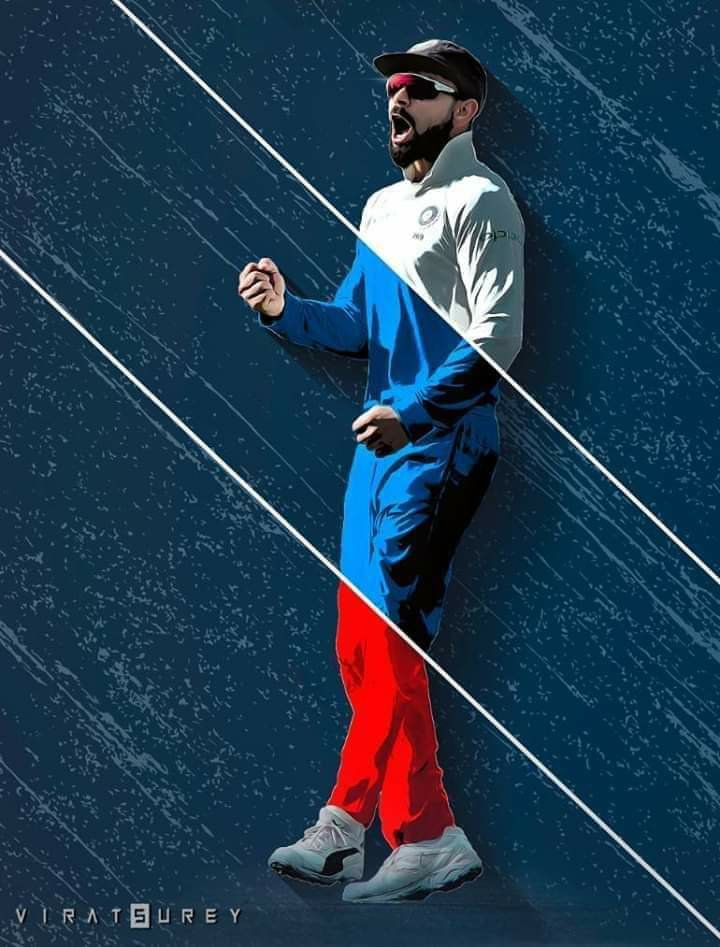 When I started watching cricket, in 2003, there were two cricketers whose names were always pronounced with utmost awe and respect. One was Brian Lara and the other was Sachin Tendulkar. Although I had the privilege of watching Sachin for good 10 years since then, I still regret the fact that I missed his prime – the late 90s – wherein he was an absolute freak. With Lara, I was even more unfortunate as he retired in 2007.

After 16 years, I can finally assert, with pride and gumption, that I have witnessed a batting superstar during his heydays. I have followed an incredible journey(that is far from over) right from the very beginning. I have watched Virat Kohli bat with my naked eyes and that is a story I can pass on to generations !

Most of us, for one reason or the other, are drawn more to ‘attitude‘ than ‘aptitude‘. We like Rahul Dravid more for his dignified behavior than for his flick through mid-wicket. We don’t talk about MS Dhoni the batsman as much as MS Dhoni the captain. I had never bought into this. As long as a player acts within the rules of the sport, all that matters to me is his performance. And process. If he also turns out to be a nice guy, well, so be it !

That’s why I would like less of ‘Passion’ and ‘Commitment’ in this piece. That’s why I don’t care if he is seemingly ‘arrogant’. I mean, there is so much to talk about his batsmanship. Michael Clarke, former Australian captain, once said, “Don’t look at Virat when he is scoring boundaries. Look what he does when he is not scoring them.” The number of 1s and 2s he would end up with by the time he retires from limited-overs cricket, and his dot-ball percentage, will be sufficient to indicate why he is the best of his generation or, may be, of all times.

For someone with a fetish for 5-day games, the importance he gives to Test cricket is liberating. Isn’t it ridiculous that he is ranked No.2 in the world, only behind an otherworldly Steve Smith, yet it is probably his weakest format ? The phrase ‘Test cricket is dying’ is not as demoralizing as it looks when people like him are ready to wear whites, bat for hours and make the difference ! 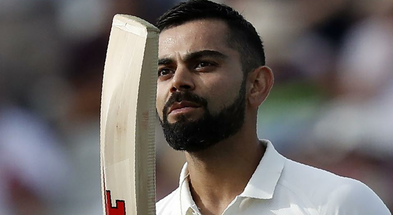 Happy birthday, Virat Kohli ! There is so much noise around your cover drive. Please put them to rest as your bottom-hand whip is the shot of the decade !